Multilingual Websites &ndash; what is the Correct Symbol?

Multilingual websites involve far more than simple translation. A good website must be localised according to culture, language and symbols.

But symbols can cause problems as one symbol has a different meaning in some countries.

To many English speakers the symbols ✓ and X would indicate Yes and No, or Correct and Incorrect. Yet some nationalities would understand the opposite. So when creating multilingual website great care must be taken in how symbols are used.

Take the English ‘tick mark’ as an example.

✓= Wrong in Finnish speaking countries (Finland and Sweden). This is because the Finnish word for wrong is väärin, and the ✓ symbol is similar in appearance to a v. In these countries the appropriate symbol for ‘correct’ might be an R (short for rätt,) or a symbol of ./.  .

In Japan the symbol ◯ (maru) or 丸印 (marujirushi) meaning yes would be used to indicate 'Correct'.

Similar notations are used in Korea, with a ◯ suggesting correct and a ‘tick’ suggesting wrong.

So symbols can convey very different, even opposite meanings to different language groups. 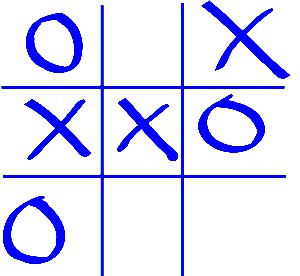 Collections of symbols can have different local names when used within the same language across different countries and continents.

Take the game shown in the adjacent image – the English would call this ‘noughts and crosses’, yet the Americans call this ‘tic tac toe’ with most players of this simple game unaware that it has different names in other locations,

In the UK the game is called noughts and crosses.

In the USA the game is called tic tac toe.

When developing multilingual websites, it is often necessary to localise within the language,  This is true for many other languages - eg European vs American Spanish. Brazilean vs European Portuguese. German is spoken differently between Austria, Switzerland and regional areas of Germany. Some languages have huge variations - Arabic is one, with large variations between the North African Magreb style Arabic and the Gulf state Arabic.

⇐ Back to Blog | ⇐ Back to Web Design