Review of Santa Tracking systems in 2014

Santa tracking started by accident when one of the US defence department’s phone numbers was given out by mistake. The staff ‘checked their radars’ and gave updates of Santa’s location throughout Christmas Eve.

What unintentionally started by accident has this year become intense rivalry of Google and Microsoft to gain positive PR.

For many years NORAD (the North American Aerospace Defence Command) has had a virtual monopoly on Santa tracking and worked with Google up until 2012 when they switched to partnership with Microsoft.

December 2014 sees the growth of significant competition from Google.  This competition has fuelled many extra features and games associated with tracking Santa from both Norad and Google.

When first viewed, Norad has the more realistic map with clearly visible ice sheets over the polar regions or Greenland to be more precise. The land and sea are clearly defined and you can see ‘windows’ of where Santa has been. 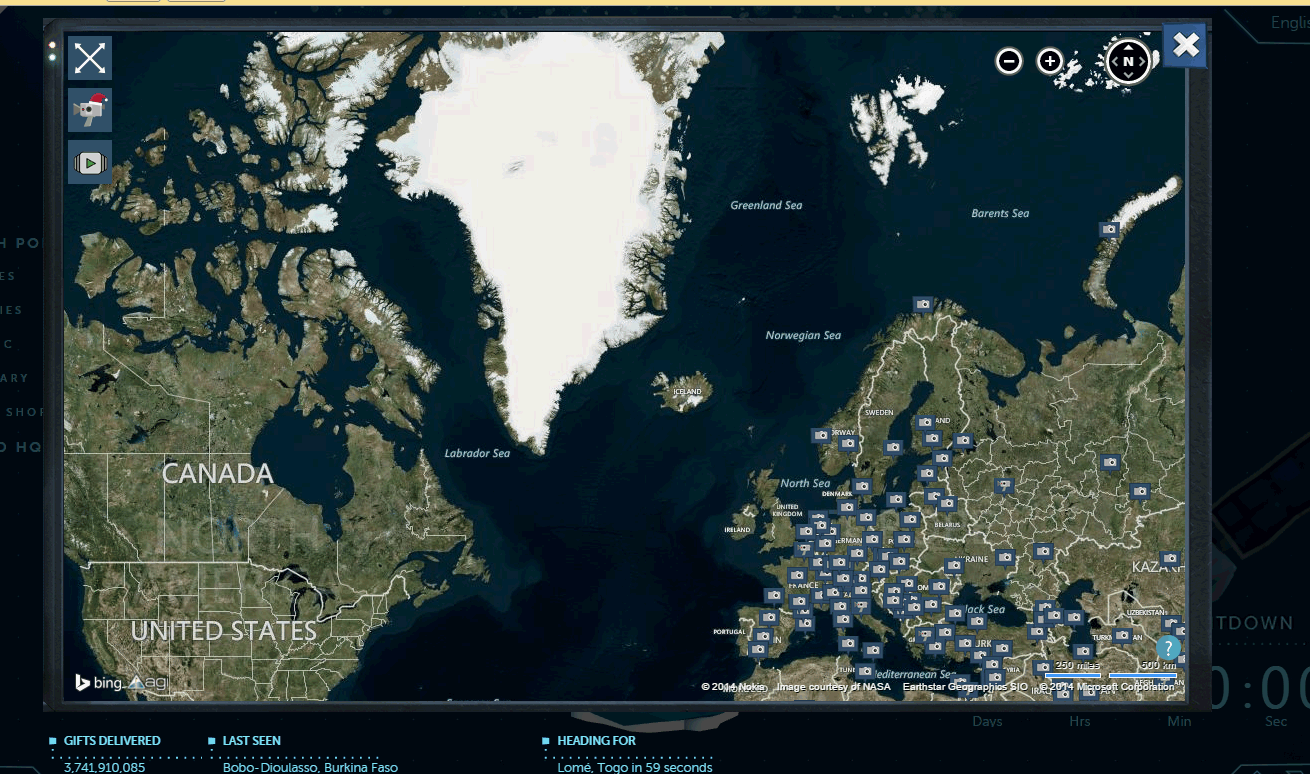 Yet the Norad windows area little disappointing, simply being a window to the Bing search engine results for that town. The graphic of Santa is not as good as that used by Google Santatracker.

The Google Santatracker is less interesting at first sight but the location graphics are better quality, with different views of Santa being visible. As Santa passes over different towns, colourful info panels appear which are easy to use and interactive. 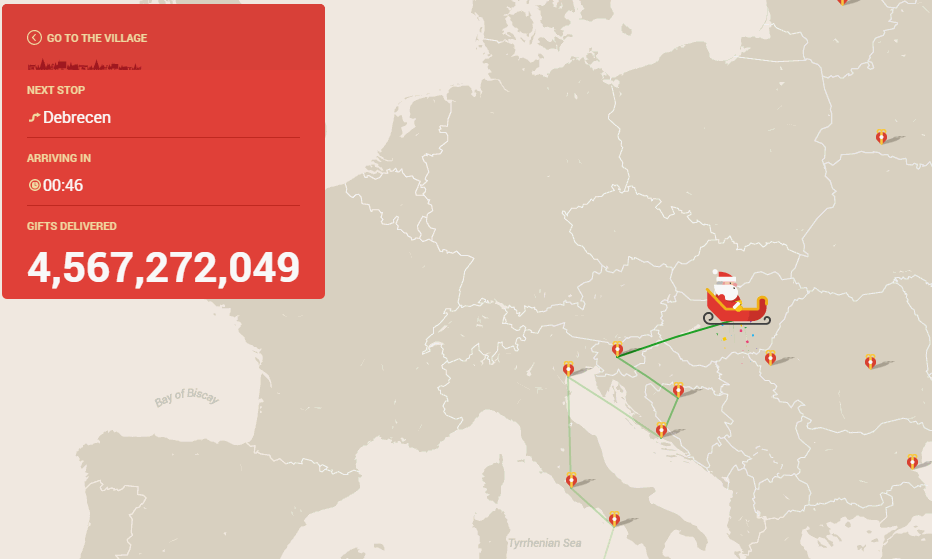 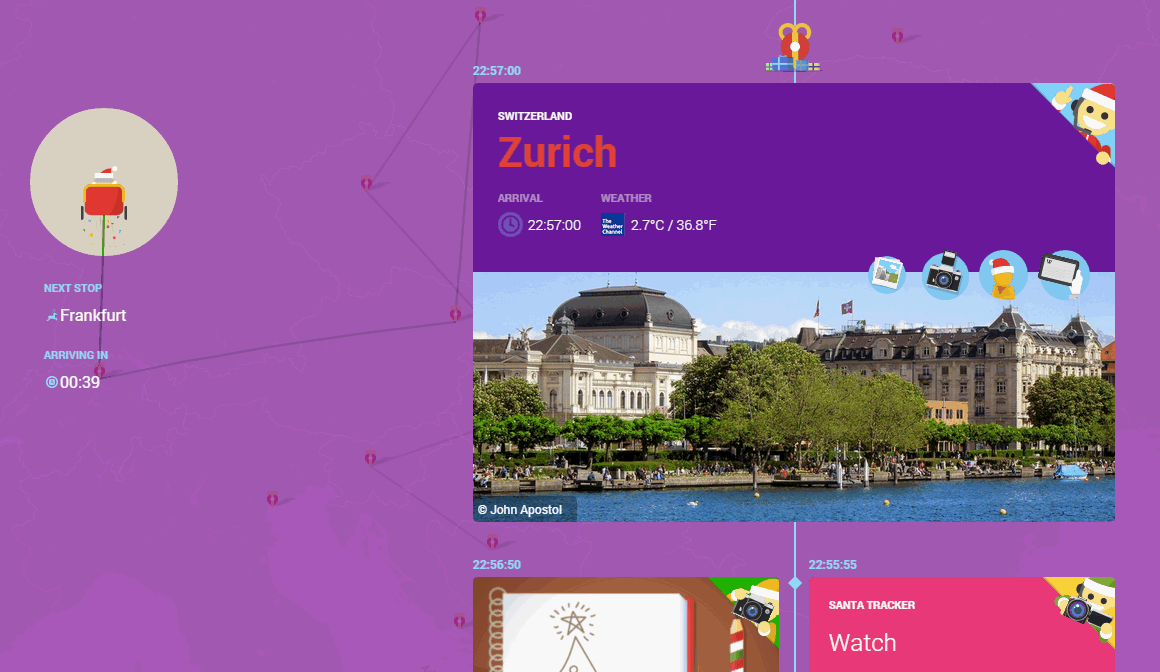 Thes colourful info panels (above) appear in a timeline fashion with enough information to be interesting and presented mainly through photos and videos. They are interspersed with short cartoon movies (below) designed to keep young children (and adults) interested. 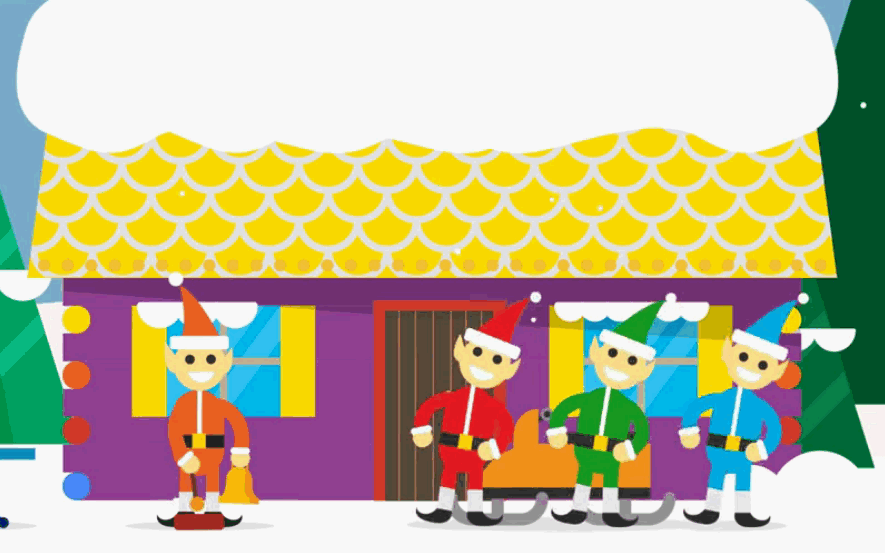 Norad has kept the Santa Cam videos – very interesting 3d animations showing Santa’s sleigh flying past significant landmarks.  These are high quality and worth looking at – but signposting to these from the main Norad map is poor, and not helped by the website frequently crashing in the Chrome browser. 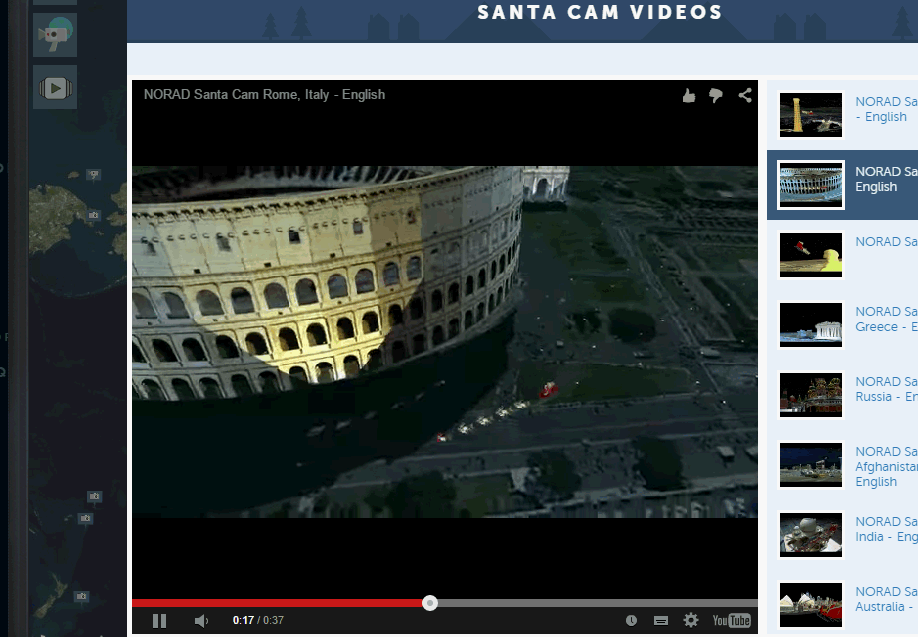 Both Google Santatracker and Norad have put effort into surrounding webpages to entertain before and after the ‘big night’.

This year the Google Santatracker is the more polished and exciting Santa tracking product to watch.

Norad would have done better to make their Cam videos more visible from the main map, rather than promote the Bing search engine. Norad has the better looking maps, and better quality videos, yet this gets missed amongst the less well thought out popup search result windows, promoting Bing. The usability and navigation is not well planned.

Google Santatracker has gone beyond an app tracking Santa across the skies, and turned this exercise into an entertainment website where the mapping play a less significant part in the overall enjoyment. It is a well designed website with usability and visitor attraction considered from the start.

In summary it appear the polished marketing presentation of Google Santa Tracker has beaten the better mapping and videos of the original Norad Santa Tracker.

ExtraDigital have produced many mapping websites and applications, particularly for tourism or air quality  information, but have not yet produced Santa tracking systems.